Our Mission
To get your life back to normal after a collision experience as quickly and easily as possible by working with your insurance company and providing professional, quality work on your vehicle.

Poynette Auto Body has come a long way since Luke Walz, a “young and stupid” new graduate of Madison Area Technical College, bought the business with his wife, Jenny.

Now, 18 years later, the business has begun a new journey as it settles into its new location up the hill at 705 E North St. in Poynette.

Poynette Auto Body has long been a mainstay of the community. In 1999, Luke said he quit his technician job in Madison “cold turkey” after six months and moved to Poynette because he learned the Auto Body’s former owner was looking to sell.

The Walzes bought the shop in the spring of 1999, close to their one-year marriage anniversary. Three months later, their daughter, Grace, was born. And from there, the family and business continued to grow – they have five children and the shop has seven employees.

“They haven’t kicked us out of town yet, so we’re still here,” Walz said.

Until now, the shop operated out of a nearby building, less than a half mile away on North Street. But Walz said Poynette Auto Body had exceeded the space.

“It was really difficult because as a growing business we have a growing customer base,” Walz said. “…And we want to make sure everyone is taken care of in a timely manner. So when you’re scheduling three, four, five weeks out … you’re doing them a disservice.”

Luke and Jenny searched for years for a new location, and when a machine shop near the fire station went up for sale, they pounced.

Luke designed the building with an architect and engineer – a necessity because of the strict codes for auto shops. The plans will transform the boxy warehouse, turning it into an inviting building with a frame made of glass, brickwork and steel frames.

“My inspiration for my design was actually visiting the Union Station in St. Louis, Missouri,” Walz said. “I liked how the steel architecture was it made it look industrial … but on the other hand its very welcoming too.”

The shop’s exterior is a work in progress, but the inside is up and running, with room to grow. While they remodel the building, Walz said they’re using a third of the space – and that area is larger than the entirety of their old building.

In the old location, Walz said they had brought the technology up to date, using new welders and bodywork technologies. But with the new space comes more capabilities. For instance, Poynette Auto Body has a new baking booth that dries paint jobs in 20 minutes.

With the new tools, the shop can go through training to become Original Equipment Manufacturer (OEM) certified — meaning car manufacturers designate Poynette Auto Body to work on vehicles, as a dealership would.

And with all these new developments, Walz is excited about the future.

“I just know,” he said, “we are now ready for whatever’s coming our way.” 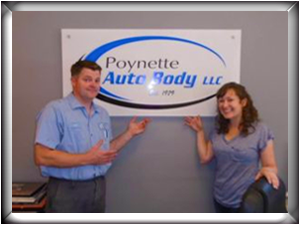